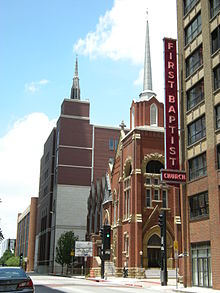 A strange visitor might enter megachurch First Baptist Church Dallas, and deliver a unique message for the Reverend Dr. Robert Jeffress (President Trump’s spiritual adviser) who prays for victory in war and approves assassinations of world leaders, while the church’s choir bravely sings about the Prince of Peace.

Dallas megachurch pastor Robert Jeffress, one of President Donald Trump’s evangelical advisers who preached the morning of his inauguration, has released a statement saying the president has the moral authority to take out North Korean leader Kim Jong Un.

“When it comes to how we should deal with evil doers, the Bible, in the book of Romans, is very clear: God has endowed rulers full power to use whatever means necessary – including war – to stop evil,” Jeffress said. “In the case of North Korea, God has given Trump authority to take out Kim Jong Un.”

WHTT Editor Charles E (Chuck) Carlson chimes in:  Wait a minute Pastor Jeffress, Jesus is a peacemaker, and so was Apostle Paul who wrote Romans 13. But you quote Paul as Donald Trump’s moral authority to murder a foreign leader.  You resort to using Christianity’s most trusted scripture, the New Testament, to justify cold-blooded killing, not just to “take out” the pugnacious and arrogant, KimJung Un, but probably to kill all those who are around him at the time, and perhaps start a war to kill thousands more. You know, and you admit, that The book of Romans is about tolerance and love, but you rely on the first 7 verses of Romans 13 to justify murder.  Are you sure you read and interpreted these few verses as Paul intended them?  When he wrote words to the effect that all magistrates were appointed by God to do good and punish evil doers etc, might he have had a different meaning to convey, since those he praised had power of life and death over him?  I think so, and furthermore, I think Paul told us the real meaning of these six verses in his own words.

Back to the editor of the Dallas Daily News, (Jeffress word in “quotes”)

Jeffress, who leads downtown’s First Baptist Dallas, said in a phone interview that he was prompted to make the statement after Trump said that if North Korea’s threats to the United States continue, Pyongyang will be “met with fire and fury like the world has never seen.”

He said that many pacifist Christians will cite Romans 12, which says, “Do not repay evil for evil,” but Jeffress says that that passage is referring to Christians, not to the government.

Jeffress is no stranger to controversy. He has said in the past that former president Barack Obama paved the way for the antichrist and drew wide attention for calling Mormonism a cult during the 2012 Republican primary. Jeffress knows his comments on North Korea could be considered controversial, even among fellow evangelicals.

“Some Christians, perhaps younger Christians, have to think this through,” he said. “It’s antithetical to some of the mushy rhetoric you hear from some circles today. Frankly, it’s because they are not well taught in the scriptures.”

Attitudes about North Korea among evangelicals are unclear, he said.

“I think many evangelicals, like most Americans, really don’t pay attention to global affairs,” Jeffress said. “I believe we’re all going to be forced to soon if North Korea isn’t dealt with decisively.”

Here are three articles, two by revisionist historian and Judaic scholar, Michael Hoffman. The third is by Mike King of TomatoBubble fame. Please read them because you won’t find this information in the mainstream media. As a Jewish correspondent remarked recently, the world has always been divided between those who have a plan and those who are kept in ignorance of it. The first is government and those who control it, and the second is the mass of ordinary people, like you and me. Although we’re ordinary, we can at least inform ourselves. It’s still not a crime…not yet.

Article 1: Ernst Zundel: A Lover, not a Hater