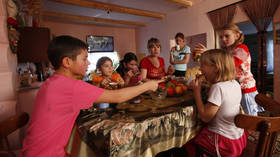 Standing strong for traditional family values is not fascism, as the mainstream media often insinuates, but merely a concern for the future of humanity, Aleksey Komov, of the World Congress of Families (WCF), has told RT.

Liberal media, spurred on by hate-mongering “watchdogs” like the Southern Poverty Law Center, have lost their collective mind over the 13th WCF meeting that took place in Verona, Italy in late March, labeling the attendees “far-right” and “neo-Nazis” who attack women and roll back the rights of sexual minorities.