How to Get Booted From Your Church

The other day I was looking for famous quotes about “free expression” or “free speech.” This one popped out:  “To prohibit free speech is the first act of terrorism.” I discovered it was written by Baruch Spinoza (1632-1677).

I thought “terrorism” had been a new word coined by George Bush (well, not really). So I did a quick search about Spinoza, and here’s what I found. He was a Dutch philosopher born into the Jewish religion. But he was a deep thinker, and said a few things about his birth-religion that the rabbis didn’t quite like. He even hobnobbed a bit with Mennonites back then.

For example, Spinoza didn’t believe in the God of Abraham, Issac and Jacob. He no doubt felt that killing in God’s name wasn’t quite the right thing to do.

His ideas got him into some trouble. Well, quite a bit of trouble. So much trouble that his religious leaders decided to boot him from their church. Now, here’s where it gets real interesting, when you read some of the excommunication benefits served to Spinoza from his ‘compassionate’ religious leaders. Remember, Spinoza was only 23 years old when he got booted from his religion by the sages.

How would you deal with a good-bye like this?

The Lords of the ma’amad, having long known of the evil opinions and acts of Baruch de Espinoza, have endeavoured by various means and promises, to turn him from his evil ways. But having failed to make him mend his wicked ways, and, on the contrary, daily receiving more and more serious information about the abominable heresies which he practised and taught and about his monstrous deeds, and having for this numerous trustworthy witnesses who have deposed and born witness to this effect in the presence of the said Espinoza, they became convinced of the truth of the matter; and after all of this has been investigated in the presence of the honourable chachamin [sages], they have decided, with their consent, that the said Espinoza should be excommunicated and expelled from the people of Israel. By the decree of the angels, and by the command of the holy men, we excommunicate, expel, curse and damn Baruch de Espinoza, with the consent of God, Blessed be He, and with the consent of all the Holy Congregation, in front of these holy Scrolls with the six-hundred-and-thirteen precepts which are written therein, with the excommunication with which Joshua banned Jericho, with the curse with which Elisha cursed the boys, and with all the curses which are written in the Book of the Law. Cursed be he by day and cursed be he by night; cursed be he when he lies down, and cursed be he when he rises up; cursed be he when he goes out, and cursed be he when he comes in. The Lord will not spare him; the anger and wrath of the Lord will rage against this man, and bring upon him all the curses which are written in this book, and the Lord will blot out his name from under heaven, and the Lord will separate him to his injury from all the tribes of Israel with all the curses of the covenant, which are written in the Book of the Law. But you who cleave unto the Lord God are all alive this day. We order that no one should communicate with him orally or in writing, or show him any favour, or stay with him under the same roof, or within four ells of him, or read anything composed or written by him.

Although Talmudic texts say Spinoza probably never became a Christian, he probably did get tired of the Talmud for saying things like: 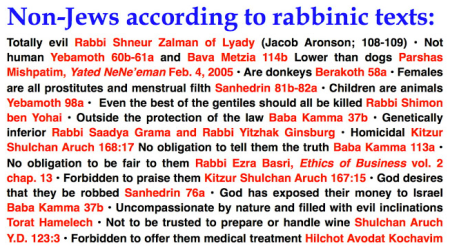