Understanding Rev. Joe Amaral: Insights into the Words and Deeds of a Useful Idiot for Zionist Israel 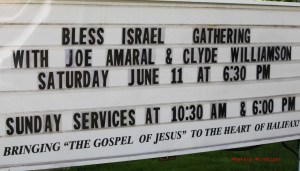 Rev. Joe Amaral has written a book, Understanding Jesus: Cultural Insights into the Words and Deeds of Christ. You’ll see “smokin’ Joe” on his First Century TV program. A likable person, probably sincere. He travels the world and conducts tours for Zionist Israel. But, is he a complete religious fake like Walis Shoebat and Ergun Canar? Or is he simply an extremist Christian Zionist like Rev. Dr. Charles McVety and just a “useful idiot” (a Christian Zionist who is more Zionist than an Israeli Zionist)?

To try to find out who Rev. Joe Amaral really is, let’s look briefly at this Portuguese-born minister of Milton, Ontario, Canada. Rev. Amaral is a Christian Zionist (an “Israel-firster”) to the core and I would cautiously call him a useful idiot; I don’t think he is a fake in the strict sense of the word. However, there are some strange things about Rev. Amaral that bother me, and even make him a suspect, given the fact he is a trained (Pentecostal) clergyman and claims to preach the gospel of Jesus Christ.

So, below I give a few bits of information about Rev. Amaral that indicate his “useful idiot” tendencies in helping the politcal Zionist cause:

Joe Amaral admits that he was a disappointed and discouraged Pentecostal pastor. Nothing new there. But what is new is his experience of hearing from God that after failing as a pastor, God told him to promote the Christian Zionist belief that whatever the political State of Israel does, it is ordained of God. Rev. Amaral therefore establishes himself as an extremist Christian Zionist, that is, “any Christian who supports the Zionist aim of the sovereign State of Israel, its army, government, education etc…for any reason.” In other words, “Bless Israel.” And this includes ethnic cleansing, war, etc.

Just a few days ago, Israeli Prime Minister B. Netanyahu  was asked by Christian Zionists: What is the best way to support Zionist Israel? His answer was simple: “Visit.” This is precisely what Joe Amaral does best. His various websites are loaded with information on how to join his tours to Israel.

It’s a pity that Rev. Joe Amaral has strayed so far from his original calling of preaching the good news of Jesus Christ. It is my hope that Rev. Joe Amaral will one day leave the cult of Christian Zionism behind him and experience a true conversion similar to this professor of theology who tells the story of his “journey out of Christian Zionism.”

This entry was posted on Friday, June 17th, 2011 at 12:06 am and is filed under Fakes & Suspects. You can follow any responses to this entry through the RSS 2.0 feed. You can leave a response, or trackback from your own site.